If you don’t have a pressure cooker in your kitchen, then you should stop whatever you’re doing and finish the rest of this article.

I didn’t start using a pressure cooker until a couple of years ago. However, once I got mine I haven’t stopped using it. Today, we’re going to be talking about a high-quality appliance.

What Is Pressure Cooking?

As you know, when you’re boiling water, it can only reach 212 degrees. The pressure cooker works by trapping this steam as the liquid inside boils. Allowing the pressure to build and reach temperatures much higher than 212 degrees. When you combine the heat and the pressure the food cooks much faster than usual.

Today with these electronic pressure cookers there are many temperature controls so that too much pressure does not build up.

There are many that also believe that the pressure cookers produce healthier foods since they don’t have to cook as long preserving many of the nutrients inside of the food.

Pressure cooking is great for things that take a long time like beans, tough cuts of meat like roasts. But they can also be used for things like soups and stews and rice. Many of the current models can even be used as slow cookers.

The Farberware pressure cooker has many great pre set programs.

The following features include

So while the title may say seven in one is actually nine programming options.

It also allows you to set the cooking time and even a delay timer if you want it to start. In the future. The keep-warm feature leaves the pressure cooker on a slightly lower temperature so that it stays warm after it’s finished cooking.

It has a 6 quart pot that should be big enough to serve four to six people.

One thing that you need to remember is that they always need to be at least a half a cup of liquid inside of the pressure cooker. Otherwise, you can burn the food and you can destroy the devices as well.

It has easy-grip handles that make the pressure cooker easy to move around and is also dishwasher safe for easy cleaning up.

Two safety features that this pressure cooker has is a locking lid and a pressure release valve. This is important as it allows the pressure to build up while your food is cooking and then you can release the steam which drops the pressure when you’re ready to open it.

The menu is simple in design and is made in stainless steel construction, which is easy to clean.

The cons would be that other pressure cookers have a few more options on their LCD display. I would usually say, when there are more features there are just more things to break.

How do you use the Farberware 7 in 1 pressure cooker?

It is very easy to use the Farberware pressure cooker. Start by plugging it to the electric outlet. Once the power is on, you can set up the cooking time depending on what you are making. You can also set whether you want to cook in high or low pressure mode.

How do I set my Farberware pressure cooker to high?

Just make sure you follow all the instructions to keep it lasting a long time and I’m sure once you see how powerful it is, you will use this several times a week, just like I do. Especially if you like homemade beans from scratch or you don’t like waiting for savory stews that normally take all day to cook.

If you happen to use this Farberware pressure cooker, let us know how you like it in the comments below. 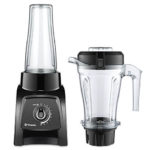 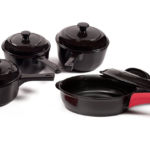 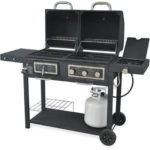